In the yard of my childhood home, a robin drunk from devouring over-ripe cherries on our tree, flew into our bay window that must have held an attractive illusory world, so much so that more than a few birds met that hard, bludgeoning reality. And after struggling for air on the ground below, it became still and lifeless. My mother, sensitive to the meekest of life forms, gathered the corpse and her two fledgling daughters for a funeral. A hole was dug, and as I watched the corpse of the bird descend into the dirt void, my mom said words, words of ritual, wishing that this bird would be in peace.

That robin’s life, unlike the other carcasses of animals on roadsides or worse, was made sacred to me, and the abyss into which some part of this bird, the part besides feathers and flesh, inhabited when it was into the ground became the eternal question mark.

My mentor describes the pre-classical Chinese pictogram of sacred as a person standing on earth, on one’s toes, reaching for the sky, the heavens. The sacred cannot be without the earth, the mundane requirements of being human, but it also has the urge for beyond such knowing.

Eventually and logically, that became the case for those beings lying unceremoniously in rotting ditches who by my eyes were not made sacred. And a moment of heightened attention in a car passing by was, and continues to be, my attempt to sacralize, because it feels necessary that we would all be given the mere gift of attention as we disappear.

Finally this week, it was this scene that appeared to me in my own ritualized space of art-making in my studio, where I stared upon the flocks of quiet, often dissolving, single, little dead birds I’ve painted over and over for the last 7 years. After enduring the dissonant if not polite questioning and dismissal from others and myself — amidst a cultural popularization of cute birds on every sundry item available (“put a bird on it”) — I was partially decoded.

And luckily, also this week, I read an essay by Susan Sontag, who fully understands the impulse to make art “towards the ever-receding horizon of silence.”:

“One result is a type of art which many people characterize pejoratively as dumb, depressed, acquiescent, cold. But these privative qualities exist in a context of the artist’s objective intention, which is always discernible. To cultivate the metaphoric silence that’s suggested by conventionally lifeless subjects (as in much of Pop Art) and to construct “minimal” forms which seem to lack emotional resonance are in themselves vigorous, often tonic choices.”

But my recent writing/searching has drawn my attention to the fact that all things, especially the experience of love, are of a continual parting. Perhaps that impossible constant attention to that coming and going, the making sacred of every moment and every thing that makes a heartbeat, that presences and reaches into us, and then dissolves into silence — Heidegger’s clearing and gathering and clearing — that is a  glimpse into the untranslatable state of Being.

For now, I can only handle my little birds.

“It seems unlikely that the possibilities of continually undermining one’s assumptions can go on unfolding indefinitely into the future, without being eventually checked by despair or by a laugh that leaves one without any breath at all.” Susan Sontag

Almost at the ocean edge, I look back up the hill, over the martian landscape to see the miles of frozen stone rivulets, overlapping and intertwining upon themselves, blanketing anything that ever had been there. It is dark, hardened lava which was at one point molten and seeping from wounds in the earth, crawling down the topography according to gravity, until it slipped into the ocean with a burst of steam cloud. 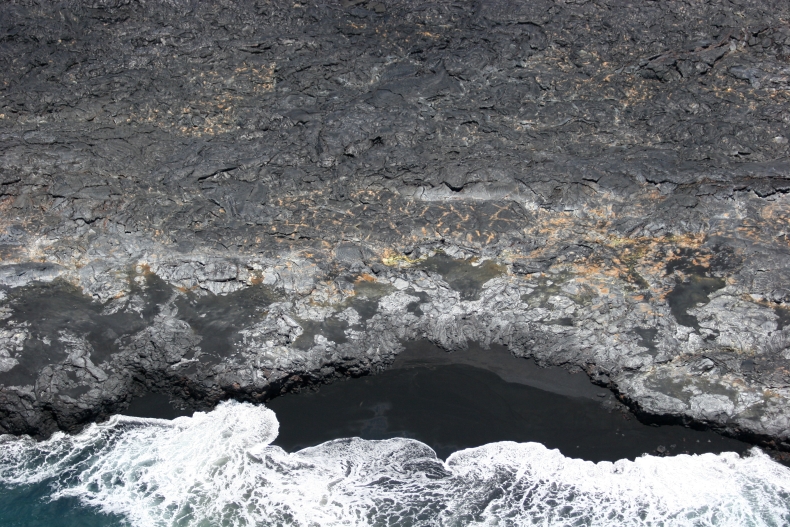 I cried unspeakably when I first saw this, at Kilauea. At first I thought I was responding to the experience of primeval vastness – a meeting with an uncompromising, prehistoric force. Or maybe because it was humbling to be in the presence of the beginning of land, the birth of earth.

For some reason, this is the image that comes to mind as I ponder why I have inexplicably taken a break from writing here.

At some point my philosophy mentor mentioned to me that it is best not to overwhelm the writings or artworks of others with my own subjectivity. It is a balancing act to read the work of others and engage in dialogue, to make comparative study without projecting too much of my own material and subsequently dampening them. To listen without talking over them.

In the last few weeks I have been reading hyperactively, but in a way also bordering on attention-deficit disorder. From Kierkegaard’s crowd of untruth to Anna Akhmatova’s poetry of personal truth amidst a  crowd of censors. And there is George Steiner’s grammars of creation, eruditely nostalgic for the messianic, and Wittgenstein’s language games of lost faith. I have let the writings of these thinkers run over me, perhaps not unlike the rivers of the slow moving, but nihilistic lava, making its way to a border of another prehistoric vastness – my ocean of ignorance. While the writings have been resonant, elegantly constructed and provocative, they are opaque. And maybe it is best to let them do their work before I attempt to crash in with my callow response, my impediments, my convictions.

In short, to let answerability take the form of silence.  However, for those of us who know the therapy office, the dead end of a conflict, or know the time in front of one’s own intransigent painting or sculpture, there is a silence that is laden with an almost perceivable din, however healing it may be. And then there is a silence of a higher order, of untranslatability.

Schopenhhauer said, “Were the universe to perish, music would endure.” And in the moment of pondering the lava field, where seedlings somehow sprout in rock, and liquid rock in its extension of earth annihilates life — creation meets destruction. Artists and writers might want more to be mediators of where sound meets silence, and form meets formless. Paul Celan’s breath-turn. In the end, if I were in that lava field, facing the force that we all perish by, I may be trivial and sentimental, but I would want to hear Olomanu’s plaintive slack key guitar and the lyrics of a homecoming: “Last night I dreamt I was returning. And my heart called out to you: To please accept me as you’ll find me. Me ke aloha ku’u home o Kahulu’u.”