The most profound artwork questions what exists, but at the same time what is not there. Sheila Ghidini’s exhibition at Chandra Cerritos Contemporary Art Gallery, “Conversations,” addresses the seen and unseen through a series of drawings and installations involving intricate choreographies of chairs and birds — and negative space. Her careful drawing and skillful choices remind us: See in order to draw, draw in order to see — but most importantly, draw in order to illuminate the unseen.

Sheila composes her chairs with an infinite number of graphite marks with the facility of a deftly focused draftsperson, creating a tension between the object’s stillness and the energy of mark-making. This intense focus brings equal attention to the swaths of energized negative space surrounding the drawn object. For example, in the piece entitled, “One Chair,” the solitude of a single object in white space precipitates a question, a longing. And what exactly is longed for is the inviolate mystery that makes Sheila’s drawings philosophical, bringing an untranslatable insight into the human condition. 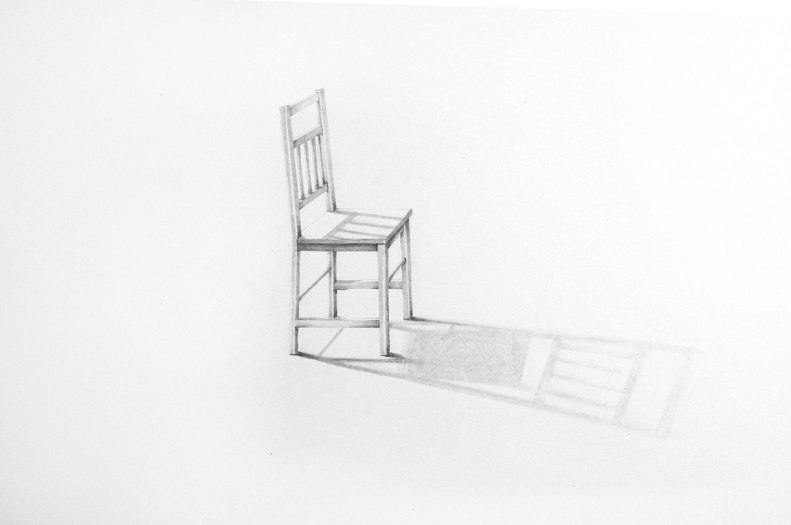 “One Chair,” by Sheila Ghidini, 2013. www.sheilaghidiniprojectspace.com

The earliest artists, traditional Chinese brush painters, heralded negative space as much as modern, Western artists delighted in filling the entire picture plane. For them the space untouched by brush was the nothing that is something, a space for contemplating what is beyond that something. That space is deeply connected to the philosophical concept of nothingness running through Taoism and Buddhism. In that vein, the Mustard Seed Garden Manual contains an admonishment from the 13th century painter, Jao Tzu-Jan, to always paint a scene with places made inaccessible to humans by nature. Because, as it is here surrounding Sheila’s lovingly rendered chairs, the dense, white nothingness obscures the contexts of their existence — and incandesces what is most beautiful in the mind. And true to the Buddhist aesthetic concept, yugen, we are most entranced by mystery.

Even in a composition of a group of chairs, as in the piece, “Conversation 10,” where different vanishing points for each object are used within the same composition, the same longing persists. The chairs, whether metaphorical or iconic of ourselves, are alone together. They inhabit the same context, but in different perspective realities. Recalling the ubiquitous dark matter that makes up our universe and is only detectable by instrument and not by light, these drawings are of presences, interactions, and possibilities that are around us always, but unseen. But here, lights and shadows figure centrally in Sheila’s rigorous drawing. The areas of highest value on the chairs are the same as the space engulfing the chairs. One could conclude that the negative space is the same entity as that which reflects light — and perhaps is light itself. 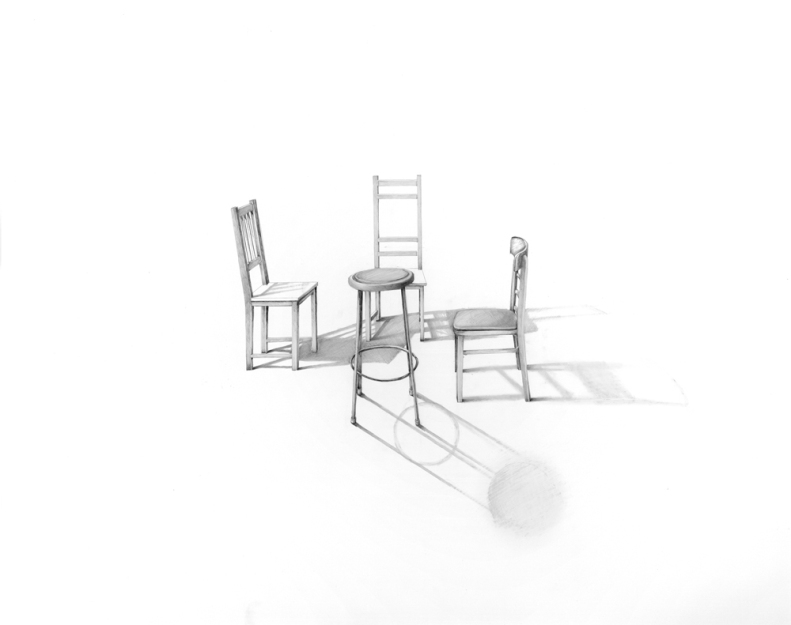 Therefore, when her installation of a sculpted, white chair enters pictorial space by dint of a graphite murmuration of birds drawn around and through the architecture of the chair and wall, the chair and wall similarly dissolve. The firmament, the reality, that you and I rely on itself becomes negative space, becomes light. And true to thousands of years of mystical understanding of the mediatory role of birds, as with the Asian affinity for negative space, Sheila’s work returns us to what is easily forgotten outside of moments of poetic and artistic attention: There is a horizon beyond our knowing. And let it be full of light.

“We don’t need to see anything out of the ordinary, we already see so much.” Robert Walser, A Little Ramble.

The 12th century Japanese poet, Saigyo, lived in horrific times of war, chaos, and scandal. He descended from a lineage of warriors, and after violent service to the Emperor, he took up the robes of a monk and the pen of a poet to both understand and release the straits of human-ness, his metaphorical and literal bloodstained past, the limits that all humans are born into.

In both life and writing, he became a homeless wanderer. And it was during these unceasing peregrinations between mountainous temple sites and towns that he used the ability of nature’s images to capture all that matters through deceivingly simple words.

and in the sole tree starkly

rising to its side

sits a dove, calling to its mate:

In his poems, words as single ideographs balloon with layers of meaning, and no one meaning stabilizes over another. What we think is important becomes indistinguishable as night falls. What remains there is the gift of the dove’s birdsong lilting in the dissolution of light — into awesome darkness.  As Sam Hamill writes, thoroughly intimate with Saigyo and profoundly aware that song might be the last thing heard, that words are the springboard into nothingness:  Those that I love are more beautiful because one of us will die.

I recall the moment driving home from the hospital after giving birth to our son, a process that even in good circumstances is seismic to the foundation. And in my case, I exhausted myself to the point of an acuity of my mortality. So there I was, dispossessed, with one foot still in the non-world, while my family packed up the days-old baby asleep into his carseat, also with one foot in the non-world. We were heading home.

Oddly, our destination in my mind’s eye was my childhood home. Driving down the familiar coastal route, I only saw my childhood living room with the wretched, green upholstered chair that I spent so many hours in, there under the expansive pane of glass through which was our neglected garden, littered with robins pecking at unwanted cherries. Even when it became clear that this was not indeed where we were heading, that the last time I stepped foot in this house was decades ago, I could not understand how to get to my current home, the one “known” for the last third of my life. I experienced a moment of homelessness.

Of course my literary hero, George Steiner, drawing on writers ranging from pre-classical Chinese poets to Holocaust survivors, professes this homelessness, that we are always guestworkers, “frontaliers in the boardinghouse of life,” regardless any distraction from this eventuality. It is the same for Dante, in his love for Beatrice, who travels through the three realms of the dead. And that the epic narration of Odysseus is in his journey, the textual death occurs when he reaches home.  Chuang tzu’s free and easy wandering, which is incredibly not free, nor easy.

Because we are human. We need a home. If we are to have a home, according to Bachelard, it would be like the fragile nest. Every precariously woven-together twig and dried straw comprise our human desire to hope for the future, and the precious eggs it cradles — but also the acceptance of its propensity to decay, fall apart, to be destroyed — to be ephemeral. The nest acknowledges the potential for me to be without the soul-killing need to push against Being, distracted from where the beauty of it lies. I have exhausted myself in my will to make things certain — because, as I am reminded in my changeling son, the infinite little losses in my body, my relationships, my art-making, and how in this moment right here is the possibility of perishing — words are anything but certain.

“When you are philosophizing, you have to descend into primeval chaos, and feel at home there.” Wittgenstein.