This entry wrote itself this morning on my jog, in the valley tucked away from the ocean shore. There in the chapparal valley are my kindred birds, families of quail fused together. One adult male is always vigilantly poised atop a signpost or garbage can, alertly standing guard over the small herd of fuzzy fledglings and their preoccupied surrogates pecking in the dry grass. I always regret that I must pass through them, causing them to scatter like field mice into the brambles that line the creek. The brambles where I know lurks a chubby, yet insatiated bobcat.

Despite being worn, I chose to heave myself up from the valley floor, along the switchbacks that ascend the side of a sun-lit mountain. Along the way, as predictable, I become anxious of whether I am able to reach the summit, that it is always longer and farther than I remembered. I try to recall that if I just attend to what is going on around me, go inward into my thoughts, even the burning in my legs, I will be less aware of the draining heaviness of the future tense.

Such is using any medium to create. A self-consciousness of one’s tools can turn them into the bars of a prison. We have developed bars around these lights of vulnerable creativity, sometimes so ornamental that others approve of them so much as to make us invest more and more in them. Yet the bars restrict and the air is stagnant therein, allowing only precarious involvement on the thin breath of things.

They amount to a gilded cage, polished to a mirror surface enclosing the songbird. This is the self-image of Narcissus, the trap of self-congealing. Even if it might provide both protection and adoration from the Crowd, the illusion of a subsistent self does not allow ephemeral song to take wing. 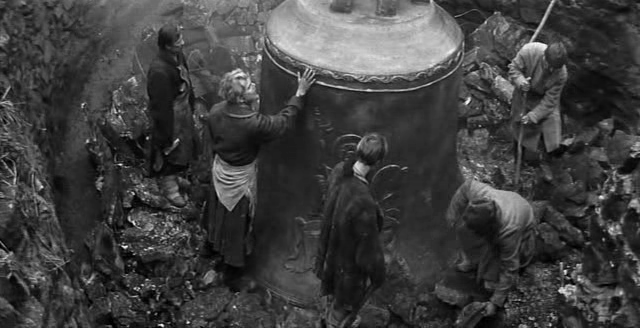 (Scene of the Bellmaker, from the film, Andrei Rublev, by Tarkovsky)

I sensed a predictable relief when I reached the top of the summit this morning, because yet again, I got to where I didn’t think I could go, and even more, I was yet surprised by the expansive view of the valley floor below extending to the sea. It occurred to me that there are summits that are exponentially harder to reach than my little hill of this blog, arriving upon its first birthday. How I curb my vulnerabilities and borrow from convention throughout is damning. And the more arduous and improbable to overcome this, the more solitary it might be to reach it — and the less likely anyone else can confirm it. Even the parasitic and invulnerable art critic Clement Greenberg said, “All profoundly original work looks ugly at first.” I have not the courage for this freedom to be ugly, nor the freedom to not be anything at all.

But it stands that I am grateful for my tribe of friends who stand guard over this endeavor, as it works its way through its awkwardness and conventional shortcomings.

I am profoundly in the arms of love.

(This poem was sent from Alice Bach, the first ever to stand guard over my writing)

Be careful of words, even the miraculous ones.

For the miraculous we do our best,

and leave not a sting but a kiss.

They can be as good as fingers.

They can be as trusty as the rock

you stick your bottom on.

But they can be both daisies and bruises.

Yet I am in love with words.

They are doves falling out of the ceiling.

They are six holy oranges sitting in my lap.

They are the trees, the legs of summer,

and the sun, its passionate face.

Yet often they fail me.

I have so much I want to say,

so many stories, images, proverbs, etc.

But the words aren’t good enough,

the wrong ones kiss me.

but with the wings of a wren.

But I try to take care

and be gentle to them.

Words and eggs must be handled with care.

Once broken they are impossible